Since the birth of human civilization on the earth, humans have been in the constant quest for the progress and betterment of themselves in various ways. They have made a gradual progress in fields of their existence. From the primitive living organism, they have transformed themselves into the most advanced species, living on earth. They have gathered knowledge and learnt the use of various things in the process of their evolution and development. They have made significant evolution in the field of language and literature, art and culture, and even science and technology. 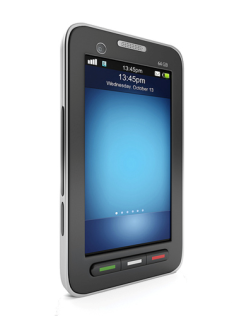 Since the introduction of mobile phone in to the world of human, it has changed the entire dimension of the mode and structure of the telecommunication. Induction of mobile phone has emerged as the technological boon all over the world, forming a strong network among people from each and every corner of the earth. Mobile phones have made the life and communication in the human life easy. With the continuous development and up gradation, various changes have also been found in the mobile phones as well, with the introduction of touch screen technology.

Gone are those days of typing a text on the hard and inconvenient keypad of a mobile device. Introduction of touch screen in the mobile has made the life of people very easy and fun. As it is the latest in the technological quotient, thus it helps in enhancing the style as well as use of the mobile device. Touch screen can also be categorized into two important aspects, one is capacitive touch and other is resistive touch. However the former one is the better in the context of ease of use.

Capacitive touch technology has made the use of touch screen mobile device very easy and fun, now there is no need to worry about touching the screen again and again to get the desired effect. Capacitive touch can sense the human finger and act accordingly. However the advantages are-

-· Saves spaces on the mobile devices for the large screen, as it does not require space for the keypad on the device.

-· Provides scope for the inclusion of the various features and technology.

-· Make provision for more entertainment in the mobile device.

Since the gradual development of the human mass, they have brought a revolution in the industrial arena and science and technology. These revolutions have made significant change in the entire paradigm of the humans. Human world is now totally based on the technological reforms. Be it in the field of education and learning, health and medicine, law and order, trade and commerce, transport and communication, media and entertainment, role of technology is significant. Every human move is now measured and managed by the technology.

May James, is a regular blogger, and have been authoring articles on various technology topics for the past decade. She is a regular contributor to FreeSocial.TV.
This blog is listed under Development & Implementations , Gadgets , Hardware and Mobility Community
Share this Post:
0
Was the blog helpful?
Related Posts: