So you’re starting a new iOS project, you received from the designer all the .pdf.sketch, and you already have a vision about how you’ll build this new app.

However, it’s time to do something with all these UI elements; UIButtons will receive finger touches, UILabels UITableViews need someone to tell them what to display and in what format. 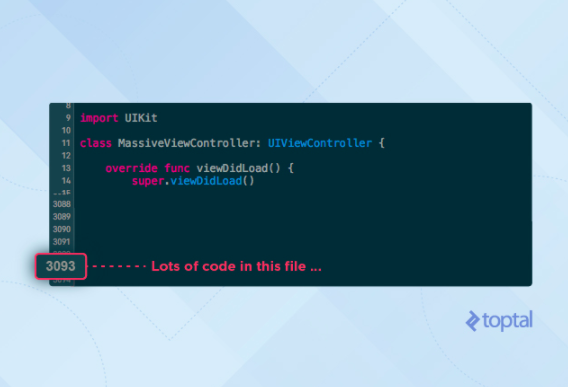 You ended up with a lot of spaghetti code.

In no time, your ViewController become too smart and too massive.

Networking code, data parsing code, data adjustments code for the UI presentation, app state notifications, UI state changes. All that code imprisoned inside if-ology of a single file that cannot be reused and would only fit in this project.

How did that happen?

You were in a rush to see how the back-end data was behaving inside UITableView so you put a few lines of networking code inside a temp method of ViewController to fetch .json the network. Next, you needed to process the data inside .json so you wrote yet another temp method to accomplish that. Or, even worse, you did that inside the same method.

ViewController growing when the user authorization code came along. Then data formats started to change, UI evolved and needed some radical changes, and you just kept adding if into an already massive if-ology.

But, how come UIViewController what got out of hand?

UIViewController the logical place to start working on your UI code. It represents the physical screen you’re seeing while using any app with your iOS device. Even Apple UIViewControllers its main system app when it switches between different apps and its animated UIs.

Apple bases its UI abstraction inside UIViewController since it is at the core of the iOS UI code and part of the MVC design pattern.
Upgrading the MVC Design Pattern 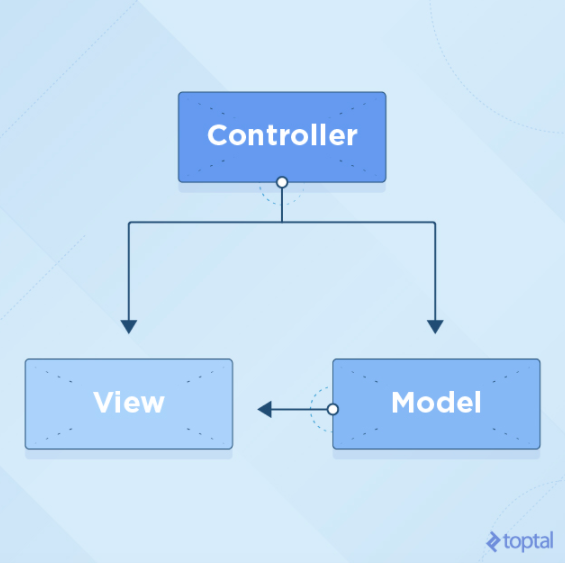 In the MVC design pattern, View is supposed to be inactive and only displays prepared data on demand.

should work on the Model data to prepare it for the Views, which then display that data.

is also responsible for notifying the Controller about any actions, such as user touches.

As mentioned, UIViewController is usually the starting point in building a UI screen. Notice that in its name, it contains both the view and the controller. This means that it controls the view. It doesn’t mean that both controller and view code should go inside.

Easy to see that this could lead to View and Controller code paths getting crossed.
MVVM to the Rescue

This is where the MVVM pattern comes in handy.

UIViewController supposed to be a Controller in the MVC pattern, and it’s already doing a lot with the Views, we can merge them into the View of our new pattern - MVVM. 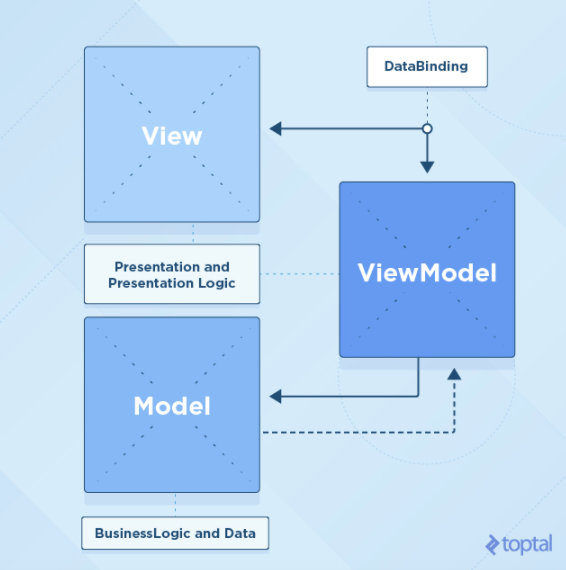 In the MVVM design pattern, Model is the same as in MVC pattern. It represents simple data.

is represented by UIViewUIViewController, accompanied .xib.storyboard, which should only display prepared data. (We don’t want to have NSDateFormatter , for example, inside the View.)

Only a simple, formatted string that comes from the ViewModel.

ViewModel hides all asynchronous networking code, data preparation code for visual presentation, and code listening for Model changes. All of these are hidden behind a well-defined API modeled to fit this particular View.

One of the benefits of using MVVM is testing. Since ViewModel is pure NSObject (struct example), and it’s not coupled with UIKit, you can test it more easily in your unit tests without it affecting the UI code.

Now, the View (UIViewController/UIView) has become much simpler while ViewModel acts as the glue between the Model and View.
Applying MVVM in Swift 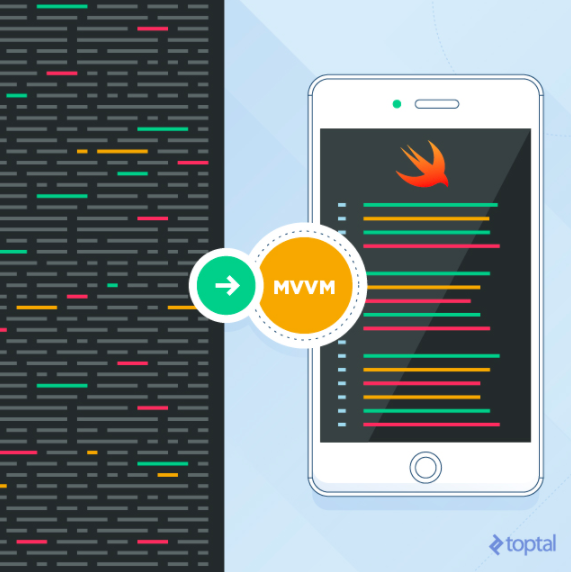 To show you MVVM in action, you can download and examine the example Xcode project created for this tutorial here. This project uses Swift 3 and Xcode 8.1.

There are two versions of the project: Starter and Finished.

The Finished version is a completed mini application, where Starter is the same project but without the methods and objects implemented.

First, I suggest you download the Starter and follow this tutorial. If you need a quick reference of the project for later, download the Finished project.
Tutorial Project Introduction
The tutorial project is a basketball application for the tracking of player actions during the game. 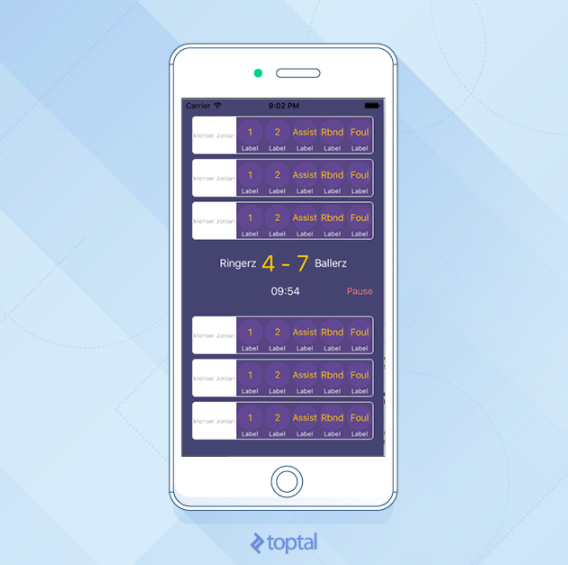 It’s used for the quick tracking of user moves and of the overall score in a pickup game.

Two teams play until the score of 15 (with at least a two-point difference) is reached. Each player can score one point to two points, and each player can assist, rebound, and foul. 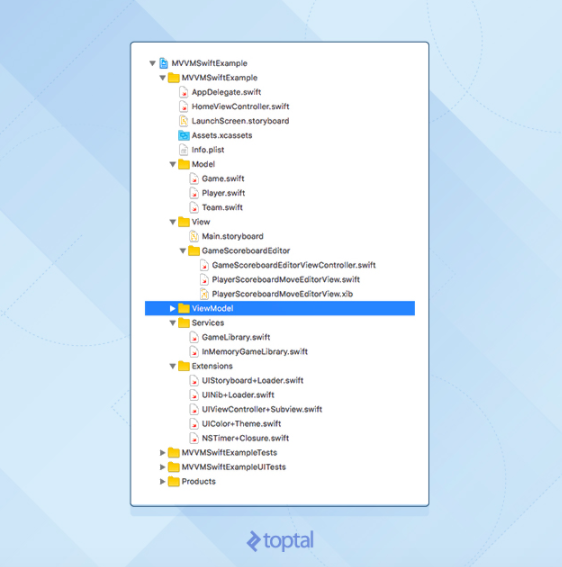 The downloaded Xcode project already contains placeholders for the View objects (UIView and UIViewController). The project also contains some custom-made objects made to demo one of the ways on how to provide data to the ViewModel objects (Services group).

Extensions contains useful extensions for the UI code that are not in the scope of this tutorial and are self-explanatory.

If you run the app at this point, it will show the finished UI, but nothing happens, when a user presses the buttons.

This is because you’ve only created views IBActions connecting them to the app logic and without filling UI elements with the data from the model (from Game, as we will learn later).
Article via Toptal.
This blog is listed under Development & Implementations Community
Share this Post:
1
Was the blog helpful?
Related Posts: