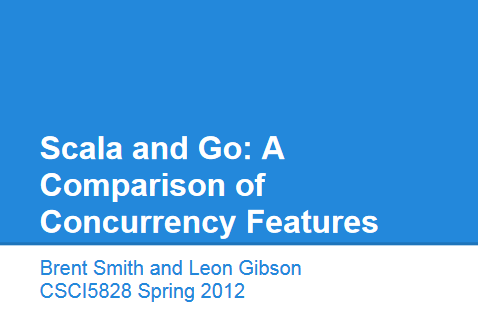 As you know, a programming language is a set of rules that provides a way to tell a computer what to do. It’s a notation system that is both human-readable and machine-readable. The same way as some people speak English and some French, there are different programming languages. They have been designed to fulfill the needs of various types of programs. Recently, there was a lot of discussions around languages like Scala and Go among IT developers in Ukraine. The truth is, they have been successfully using both for years, but what makes them so popular? How do you choose one? Which one fits one’s needs best? To answer these questions, let’s dive into history for a short bit.

Scala or Go, that is the question

So, what do we know about these two languages?

Scala and Go, what do they have in common?

Before comparing them, let’s start with what they have in common. Right, they are both growing in popularity. But why? They are both strongly typed languages. Also, static languages like these catch bugs earlier – they spout error messages at compile time, rather than runtime.

One other thing these two languages excel at is concurrency. Both provide language-level concurrency constructs that are incredibly easy to use. And with distributed computing gaining popularity, concurrency is crucial. They both have first class built-in concurrency primitives: Scala leans towards the Actor model, while Go uses the CSP model.

While Scala seems to leave the impression of one of the most sophisticated languages designs, Go seems to be easier to use for people who don’t yet understand functional programming and the benefits it brings. As said above, Go seems to be the language of choice for large projects with many people involved, and its simplicity seems to be the reason for this.Scala is also a language created completely from scratch and has very strict opinions about how code must be structured. Meanwhile, Go’s automatic code formatting seems to be a popular feature. There is only one way to format code, and all the tools do that for you. It helps save programmers save hours of work, without having to worry about details.

These are only a few points of comparison that we brought up. If you want to know more, take a look at this detailed article that offers a deeper analysis of Go and Scala’s concurrency features.

This article was originally posted here - https://qubit-labs.com/better-scala-go/.
This blog is listed under Open Source and Development & Implementations Community
Share this Post:
0
Was the blog helpful?
Related Posts:

Why data integration and analytics is importa...

Is Cost an Important Factor When It Comes To...