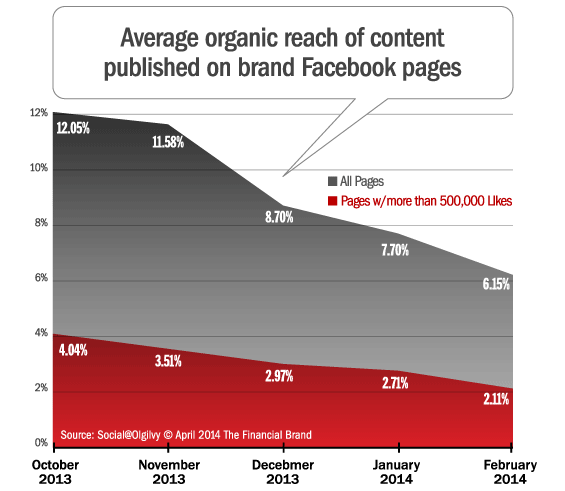 Over the years companies and brands have invested heavily into their Facebook Pages for Business. In the initial years, organic (not paid for) reach- the number of people who saw page posts - was high. Brands built up their fan base believing that reaching their audience on Facebook was free. By 2012, the organic reach had decreased to 12% on an average.

In the early part of this year, companies noticed and voiced concern over organic reach falling to less than 10%. Even as early as February 2014 large brandsâ Facebook posts reached just 2% of their fans as reported by Ogilvy. Agencies voiced their anger since Facebook had initially encouraged advertisers to buy ad campaigns that increased their likes and followers. Reacting to criticism June 2014, Facebook admitted that it had changed its algorithm to serve âhigh quality contentâ in the News Feed, and advised businesses to post relevant content - content that teaches people something, entertains them, makes them think, or in some other way adds value to their lives for organic reach and suggested use of paid ads.

The final blow was delivered in an announcement by Facebook on 14 November stating that starting January 2015, promotional Page Posts will reduce in News Feed. They have defined âpromotionalâ as posts whose objective is to make people buy a product or download an app, enter promotions and sweepstakes and posts that duplicate content from ads.

Is organic social marketing on Facebook dead and what are the implications for businesses and brands?

The first reaction likely is to abandon Facebook as a social media marketing platform. However if you consider that users on Facebook have always preferred useful and entertaining content change in strategy is required. Your Facebook Page is still a valuable hub to publish interesting content.

Be prepared to spend money to increase reach of your best posts. The easy way is to use the âboost postâ feature. You can target people by their location, age, gender and up to 10 interests. The other way is promote a post by using the Ads Manager. It gives you more targeting options plus bidding options; you can set up âconversion pixelsâ on your website and monitor conversions from Facebook visitors on your website.

Recent survey by Forrester shows that in US, 45% of people who want to keep in touch with their brand visit the website, 29% subscribe to email, while only 16% visit Facebook Page or become a Fan. Given the fact that only 2% of Facebook posts reach fans and less than 0.1% actually interact with each post, and that you cannot post promotional content, bigger companies should seek innovative ways to connect with their community. Brands with large and active communities can build their own social platform for their community. Tools like Socialgo make it easy to create and manage a custom social site with blog, events, groups and forums.

Important categories you should add to your r...

10 Tips for Graphic Designers in the Digital ...