A common acronym in the world of web servers is LAMP, which stands for Linux, Apache, MySQL, and PHP. There are some variations to this, such the P standing for Perl or Python or M standing for MariaDB, but for the purposes of this article we will be reviewing Apache, MySQL, and PHP, as well as what they can do and how they benefit users. Another term you may hear is WAMP; this is simply a similar configuration in a Windows environment. It is also important to remember that the L in Linux can be any flavor of Linux (Ubuntu, CentOS, Red Hat, etc.) so we will be focusing on Apache, MySQL and PHP in this article.

Apache is software that enables someone to implement an HTTP Web Server, and is considered to be the most popular Web server in the world. Because of its popularity, most applications that use a web server, such as Wordpress, use Apache as a core part of their installation processes when installing from scratch. Apache is open-source software that is developed by the Apache Software Foundation, and like most open-source software it can be downloaded at no cost.

MySQL is a database management program that is owned by Oracle, though there is a community version that is commonly used, as well as competing open-source programs such as MariaDB. MySQL is important because most applications require a MySQL database in order to store information, so most programs that need a database will need MySQL or one of its cousins. This includes programs like Joomla, Magento, and more.

Finally, PHP focuses on scripting, both server-side and inside the command line; it can be used to write desktop programs as well though this isnât as common a use for PHP. PHP is free software released under the PHP license, and is available for many platforms. PHP is capable of outputting any form of data, from code to videos, and it pairs very well with MySQL via extensions designed to allow them to talk to each other. This is where these 3 technologies start to mix together to enable you to deliver a solution.

So what does all of this mean? In laymanâs terms, this means that PHP delivers material from a database (such as MySQL) to the end user via their browser (populated by Apache). In many cases you will install an application in addition to the LAMP/WAMP setup, which is how you create a server specific to a particular application, such as Wordpress, Joomla, and many others. The actual applications are all available at no charge (MySQL has paid versions), so anyone that wants to look into one of these solutions can once they have the platform to work with.

Because LAMP is so important for many business applications, many cloud providers such as Vault Networks provide templates with LAMP already baked in so you can proceed to the next steps that you need to deliver your mission-critical business applications. After all, why spend time downloading the components after building a cloud server when they can already be there to begin with? 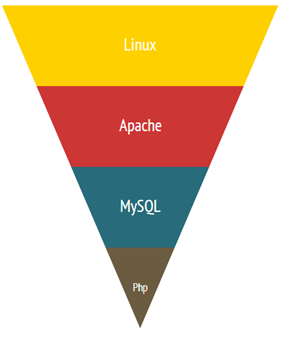