Can you think of a Google version where mobile searches serve results from mobile web as well as the apps on your phone? It sounds just excellent if it was possible to choose how the page would appear as you click through it. Be it through the mobile web or on an app that has been downloaded already to your phone, which gets opened up automatically serving you content from deep inside.

This is a multi-platform, channel agnostic domain where everything connected to the internet is searchable. Hence, the existence of apps in mobile search results happens to be way more common nowadays with developers allowing Google content indexing all over the mobile device.

However, before carrying on with it, you must understand what indexing means for mobile users and app developers. Well, to start with, what happens is Google automatically sends out spiders in order to go all over website in search of new and updated information on a consistent basis. This information is then shown in Google’s index that’s accessed every time a search inquiry is made. In actual, indexing is Google filling its searchable databases comprising of new information. 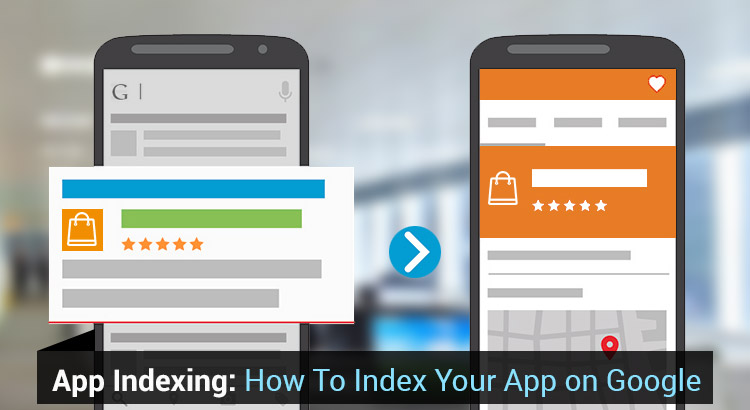 Till 2013, only desktop and mobile web indexing was done by Google and it appeared that the latter wasn’t an enthusiast of app developers, as apps were nowhere to be seen as it came to the searchable internet.

However, things have changed drastically in the last few years as earlier when you’d type in something in the Google search box, it used to present the most relevant results. But at the time Google only indexed the desktop and mobile web, whereas now mobile apps are turning ubiquitous with users seeking relevant information from websites as well from the apps. In 2013, Google got a note while launching app indexing. After all Google puts that sometimes the best answer is on the website, sometimes it’s in an app.

And now as you execute Google search on your mobile, the results are displayed from mobile web along with mobile apps. Just as mobile web, the result showcased is a deep link taking the user to a particular part of content within the app instead of launching the first screen of the app.

Still many wonder regarding how it’s relevant to your business. For instance, you are running a niche fashion store that specializes in waistcoats. Wow when linen waistcoats are searched via Google on the mobile set, you’ll come across the most relevant results for the query as Google will be indexing your app and display it in top search results. Google app indexing places your app at the front position amongst the top players as well as allows the prospects to download your app. Thus when users click on the link, they straightly land on the particular searched content in the app.

With the emergence of Google app indexing, businesses realize the significance an app embedding with deep links. As per a survey, around 22% of the top-running mobile apps deployed deep links in 2015 and then in 2016 more mobile apps would be following suite. After all the implication of app indexing is apparent as brands proactively growing their mobile presence are going to have competitive advantage over the others. Besides the marketers must understand that app indexing will ultimately ascertain inevitable dominance of mobile search. Thus, it is a static phenomenon.

Now mobile search will continue evolving and business that keep pace with the latest indexation technology will give good competition. App indexing presents a win-win situation for its mobile users, apps and Google. Mobile users have an enhanced search experience while apps get better on their discover-ability and Google drives higher engagement.

With the benefits of app indexing being evident, it’s necessary that you enable your app to be Google indexed and there are quite a few ways to do the same. Google indexes content in an app via a sitemap file or webmaster tools. In case it comes across as way too technical, then just keep in mind that your mobile app builder simple needs to enable you to integrate your app with app indexing API for Android and app indexing SDK for iOS.
This blog is listed under Development & Implementations and Mobility Community
Share this Post:
1
Was the blog helpful?
Related Posts: