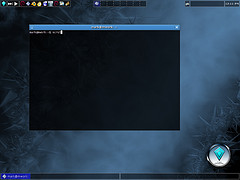 It is worth noting that a distinct terminal emulation is needed for a certain kind of terminal. For the program carrying out emulation, understanding the stream of data is very important. The data come from the mainframe at various communication levels that include session control and data link control.

A terminal emulator can execute a local echo function that could be incorrectly named an Echoplex or half-duplex. These are errors in the detection mechanism as compared to an input display alternative.

A terminal emulator is capable of implementing what is called line at a time mode or local editing, sometimes erroneously called half-duplex. In a local editing mode, a terminal emulator usually sends the host system complete input lines only. As the user adds and edits a particular line, it is held inside the terminal emulator during the editing process. The transmission will only take place once there is a signal from the user for the line to be completed where the whole line will then be transmitted.

Sometimes having the data flowing in any direction when required or at any given time is very important. This is where asynchronous terminals come in where a protocol controls when data can be sent and by whom. Examples are IBM mainframes and IBM 3270 terminals. These terminals work in block mode or screen at a time kind of mode. They allow users to make as many changes as required on a page prior to the submission of the updated screen as one action to the remote machine.

It is possible to find programs that have been created to emulate other types of terminal emulators such as Linuxâs assorted console terminals and xterm. In other cases, emulation refers to a specific standard like the ANSI. These kinds of programs can be found in different platforms from the GUI, UNIX to DOS operating systems in Macintosh and Windows. They also extend to industrial hardware and mobile phones. In Windows operating systems, a terminal emulator is known as a console.
There are good few Terminal Emulation Software out there that are reliable and secure like the Rocket Bluezone Windows 7 Terminal Emulator or Consol 2
This blog is listed under Networks & IT Infrastructure and Server & Storage Management Community
Share this Post:
0
Was the blog helpful?
Related Posts:

Admin your desktop on the way with iPhone, iP...