Virtualization, or using a single piece of infrastructure to create multiple virtual machines, is a powerful tool in todayâs business world. It allows a single box to host various applications without needing to expand to multiple machines, which can be a great boon since most mission-critical applications donât play nicely with each other if you were running them together at the same time. However, in a virtualized scenario, the two applications would never know because for all intents are purposes you have two independent servers, even though there is only one box. But how is this helpful? We will take a look at a few key ways this can help your business.

Gaining efficiency through consolidation, as we briefly noted above, is an obvious way virtualization helps the business. If you need to run 10 enterprise applications, and you only have 5 servers but they have tons of RAM and processing power available, you can virtualize those 5 servers into 10 easily (or 15, 20, etc. depending on growth plans). This also means you can scale your solution as well, if you have more resources than you actually need. Because of this, when looking at obtaining new infrastructure, you can either get the biggest machine you want (and then virtualize) or purchase the infrastructure you need to meet the needs of your applications. The choice is yours.

Most virtualization platforms such as those produced by VMWare enable you to have a second server acting as a high availability unit. This means that the second machine will be a backup that takes over in the event that the main server fails for any reason - bad cabling, defective power supply, you name it. In a worst case scenario where all servers on-site are down, you can always use a VM image to load up the infrastructure at an on-site data center (you were backing up your VM images, right?).

It is a lot easier to secure a single physical server with multiple VMs than multiple physical servers, simply because of the reduction of steps in applying those security protocols. So instead of configuring your security updates for each VM, you can set them up on the first VM, then clone said VM to populate all of the other environments you will be using. This gives you the same security in a fraction of the time.

Move to the Cloud

Virtualization, when done off-site, is also a great way to get started in building a cloud infrastructure that can be available at all times. If you have dedicated private servers, you can use these to create always available, online resources that you can access at all times. If you decide to use a public cloud solution such as vnCloud, it is that much easier to get used to the utilizing the scaling benefits that you can take advantage of, since cloud infrastructure by its nature is very similar to virtualized environments. . There are many differences in between these two options, but as a starting point the public cloud will grant better elasticity of resources (why pay for RAM you donât need) and agility, while the dedicated private machines will grant more control over the baseline of the server. The superior solution depends on other factors that you may want to discuss with your service provider or IT team. 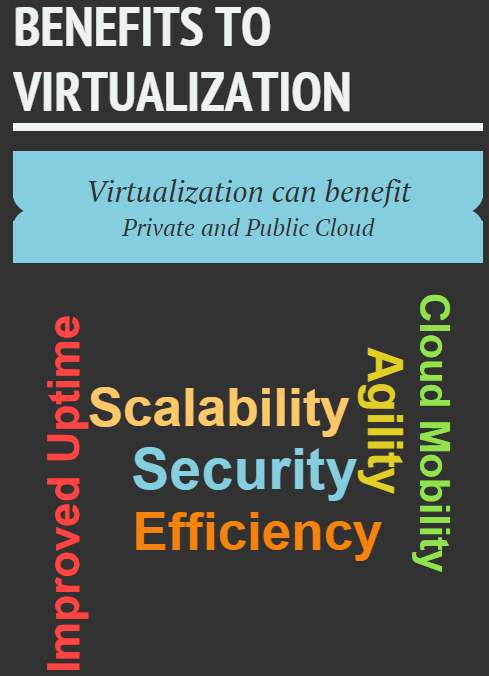 The Cloud Computing Security: Know About the ...

How Telecommuting can benefit your Company