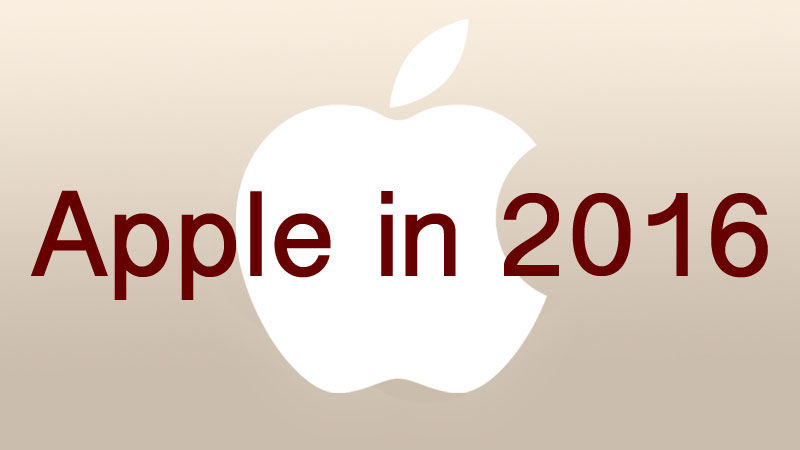 Apple has been quite innovative when it came to releasing a number of new and innovative products in 2015. Many of these products such as the Apple Watch and the MacBook have been super duper hits. The apple watch is the company's very first variable launched in the market while the MacBook is super slim and single port.

Besides, the iPhone 6S and the 6S plus along with the iPad Pro have also been launched in the same year along with a new version (fourth generation Apple TV) of the Apple TV and the 21.5 inch iMac that comes with a 4K display. Thus, it can be said that 2015 was the most profitable year for Apple as yet.

But, those months were tumultuous as the products and services of the company were criticized as not being able to come up to standard of excellence as were followed by the company in the previous years. However, it can be said that 2015 was a year in transition for Apple, and the company is expected to refine substantially in 2016 with the launch of newer products that encompass the latest technologies.

Now that the iPhone 6 and 6+ have shared their spot under the sun, the company is expected to have a busy year ahead by the expected launching of the iPhone 7 and 7+. These two models are expected to incorporate the same form factor and screen size as the iPhone 6S, but the iPhone 7 could have a lot of exciting specs. It is rumored that the headphone jack might be completely done away with and replaced by the device's lightning port for audio output. This series is expected to include 3GB RAM and a much larger battery.

The iPhone 6C is also expected in somewhere in mid 2016. If you will recall, the iPhone 5S is the only 4-inch iPhone that is currently available. Some months down the line, a new 4 inch iPhone model will be launched which is tentatively called the iPhone 6C. Although, this device does not seem to be more than a more elaborate and impressive iPhone 5S, this device is expected to include an A9 processor, included will be a 2GB RAM, metal construction, and a larger battery than what is found in the iPhone 5S. Also included may also be support for Apple Pay.

It is also speculated that Apple's next gen Apple Watch is expected to be unveiled during March 2106, when it is also expected to introduce the iPhone 6C. When it comes to the specifications, the Watch 2 is expected to deliver the same number of improvements over the original. Some of these expected improvements include the inclusion of a FaceTime camera, enhanced Wi-Fi functionality, and also a thinner display case. The release date could be somewhere in April 2016, which means that the wearable could follow the same annual upgrades as the phone.

Because of the slightly different way, in which Apple chose to roll out a new iPad pro in 2015, instead of an iPad Air 3, there is a good chance that there will be a new iPad air model in 2016. According to early rumors, it is speculated that this device may include a 4K display, and A9x processor, and a slight bump for the RAM. Although the iPad Air 3 might not include the 3D Touch, it is expected that future iPad models will incorporate this feature.

This blog is listed under Development & Implementations and Digital Media & Games Community
Share this Post:
0
Was the blog helpful?
Related Posts: