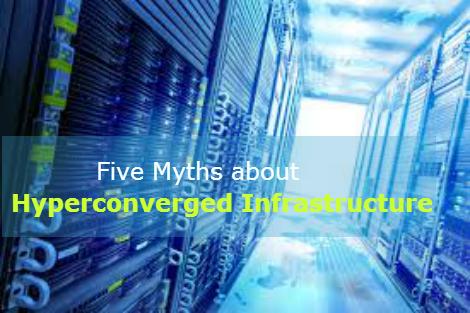 Hyperconvergence is an integration of compute and virtualization resources in a single server system. As efficient as it could be, the goal is to minimize the complexities and simplify management approach.

Nevertheless, a newly emerged concept, hyperconvergence is often misinterpreted and the conclusion created is mostly wrong. It’s not their fault though, because the terminology is fresh and people barely know much about it. Thus, myths are obvious to come up. However, at one of the summits, Gartner analysts researched on the subject and busted the myths. Below is a highlight of these:

According to the researches by Gartner Analysts, it’s true that hyperconverged infrastructures are centralized and open, but to a certain extent. Being designed out of commodity hardware and its ability to run any type of Linux or Windows makes it open and standardized solution. However, there are some restrictions when it comes to growing your deployment. If you’ve chosen any particular hyperconverged service provider, all you can do is expand through the addition of nodes to the system from the same service provider.

The technology is known to be cost-efficient than the counterparts, however the fact is that it has no real cost-saving benefits over the traditional architectures. The financial expenses aren’t precise, but when deploying the infrastructure, you could end up spending millions of dollars on it.

VDI is the considered as a popular and the best use case for deploying hyperconverged systems, but the belief is not so true. Virtual Desktop Infrastructure is one of the best use and just the one because there are several other user cases emerging, but VDI will remain the prevalent use case.

It will diminish storage network

As hyperconverged systems consolidate storage, vendors tend to develop a misconception among users that hyperconvergence will cut down Storage Area Network (SAN). But based on the researches by Gartner Analyst there are no evidence of things going that way. Although hyperconvergence has reached at the next level, storage area network still holds a lot of scope for businesses.

It will develop a gap between data center

A chronic concern running amidst the data center industry is that hyperconvergence will create data center silos. It will reduce interoperability that is the ability of a system to interact flexibly with other system. Even if it does create, hyperconverged infrastructure is potential to break down silos.