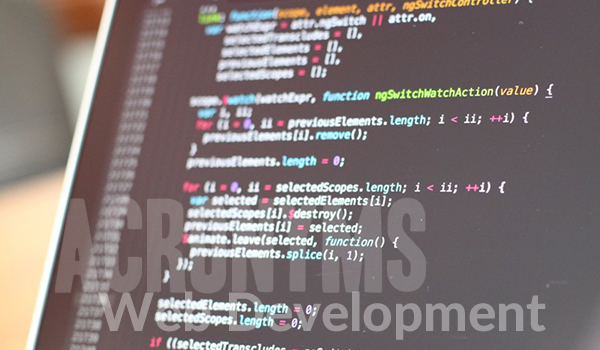 The ever increasing acronyms in the lingo of web development industry can be very challenging not only for newbies but even for practicing developers. In this article, we bring you 15 such acronyms which are frequently appearing in technological articles:

Atomic Cascading Style Sheets is a CSS writing methodology developed by Yahoo. It is based onreusable, single-purpose (Atomic) classesandshort, predictable class names that allow styling the HTML directly. During web projects, Atomic CSS stylesheets can be generated with the help of a tool called Atomizer.

Accelerated Mobile Pages is an open source mobile web standard initiated by Google that uses HTML, CSS, and JavaScript with some restrictions for improving performance of mobile sites. It also provides Components that can be used to load external resources and run scripts via the AMP runtime.

Application Programming Interface is a precise specification or protocol (set of pre-written code features) written by the publisher of the API that help developers write consistent code and implement best practices. For example, Google specifies its own API.

Block, Element, Modifier are the key elements abbreviated together to form the BEM methodology that aims at reducing CSS code base and make it maintainable. It uses strict rules of naming for writing readable, consistent, and organized CSS classes.

Content Delivery Network is a network of distributed servers that uses geographical proximity to deliver web content to users and thus ensures better performance and reduces server downtime. It caches our web content and prevents loss of data.

Content Management System is an application that allows creation, modification and organization of web content without any coding knowledge. WordPress, Drupal and Joomla are popular CMS platforms.

Call-To-Action is a message aimed at prospective customers or site visitors to perform a desirable action. It is a marketing term used in web design for dressed up links to tempt users to click on them.

Document Object Model is a cross-platform and language-independent API for HTML and XML documents that represents it as a tree structure wherein each nodes are objects representing different parts of the document.

Free and Open-Source Software is a computer program that can be classified as both free and open-source. Any computer software which doesn’t have any copyright restriction is called free. Open-source means the original source code is freely accessible and can be modified and redistributed by anyone.

First Time Use is the first time an application is loaded by a user after installation. As this is very important for app adoption process, we can get creative and make FTU interesting and convenient for users to ensure improved user retention rates.

TypeScript: Is It Worth the Effort?