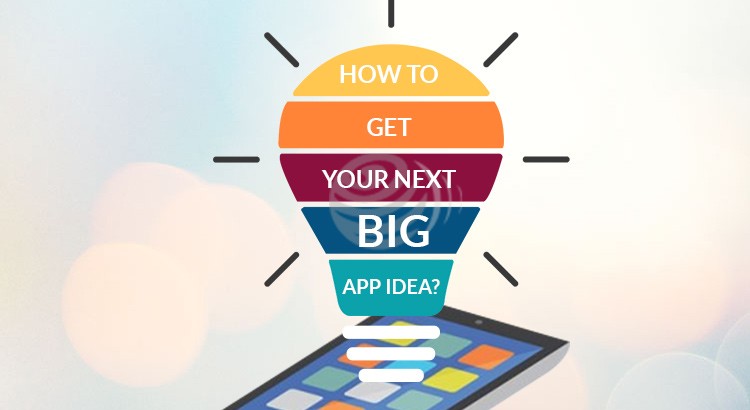 The global app market is touching new heights with each passing day and it is expected that the app economy can touch $101 billion by 2020. The app industry is a fertile soil for those who make money as well as are associated with an organization. The growing economy will reveal more opportunities for those who come up with innovative ideas. This growth will be driven by the boost in the usage of apps as well as the huge smartphone accessibility across the world. Therefore, newbie or experienced brains will display their creativity and bring forth new app ideas. It is also considerable that a number of startups have been pullulated in the world presenting of mobile apps.

After having a round of the app industry, its value, possibilities and the growth, now, the question arises what does it take in order to come up with a unique app idea? What are the steps that one must follow to create an exception app?

The following study throws more light on how people can be innovative and fertile in terms of generating new app ideas:

Churn Your Mind Out

Most of the creations that you see around today are the upshots of brainstorming; therefore, it proves to be one of the crucial parts of creativity. You can team up with friends, family and colleagues to brainstorm over an idea. One of them might come across with something extraordinary that you haven’t thought of yet. This practice also helps you improve your idea by making required alterations to it based on the valuable suggestions given by them. Besides, while going through this essential process, you can find a partner among the group. However, to avoid any legal proceeding, you must clearly communicate with them right in the beginning that you are going to user their ideas for a specific purpose.

Keep Money Aside for a While

What comes in between generating a new idea and the infertility of ideas is money because our mindset is money-oriented. It must be comprehended well that an app is not merely a startup or a business idea. For instance, you look around and observe, a number of apps are there that only give a solution to a particular problem or just aim at entertainment. It is not a big deal if your app idea does not target business or earnings. Your focus should be on mobile app development that can prove substantial for the users. Initially, money should not be your priority. Think of an idea that can attract users and deliver to them what they expect from it. It is even useful when you dream of a start up because there too investors would ask about the proof of a concept.

On all the app stores, you find apps that are mainly created to counter problems that people come across every day. Such problems are spanning to any territory from communications to lifestyle. Dig out what can be the solutions to the issues around you and how your app can solve them. You have tried for an app online and you could not find it.

People around you can provide a helping hand to identify issues and loopholes as well. Having a research conducted online especially in the android’s play store will help you detect the loopholes. Explore the existing apps and the problems why they are underperforming because this is where you can think of developing a better version of that application.

Getting Inspired from the Existing Apps

There may be a number of ways to get innovative ideas for an app; however, some other ways like cloning or getting inspiration from other apps are also worth embracing. The best practice is to go through the existing apps and follow what exactly they offer. Do not hesitate to do this, even the giants in the industry have already tried this. For instance, how Twitter and Facebook find inspiration from each other.

Facebook has been the major source of information for Myriad of social media apps. Therefore, never get hesitated to get inspired from other spaces. A crowded space means that something is happening out there. In any case, even a new idea is explored by you, and it receives a warm welcome, then it is likely to get competition eventually.

In only one situation competition can be avoided and that is when you have the most horrible idea. We believe that nobody wants that. Besides, you can dig into the app stores and get two or more apps combined in order create an outstanding and unique app.

Again, observation is the key to success. You simply look around and take a notion what is it that will play a crucial role in the time to come? Contemplate over the future and start creating it. Exceptional apps and start-ups are highly innovative. They bring us the future as today. For instance, Facebook provided us the future of communication while WhatsApp, the future of text messaging. Rather than giving others a chance to trail blaze and then follow, envision the future and be the leader.

Social media has emerged as an apt platform where ideas are available in abundance. You just have to open up your mind, observe things and have an approach to twist different ideas and create something that really makes sense. Generally, people use social media either to show their frustration or to share their thoughts. Look around, you will come across with a number of problems that require an app there. Bringing the use of tools including TweetDeck, Hootsuite or Social Mention gives you an opportunity to know what people need. By using a number of different tools, you can collect information on these tools.

New apps are being added to all the app stores every day as many of us are coming up with some unique app ideas, however, there is no reason you can’t create the same. Keep in mind that you avoid targeting money through mobile apps; they should rather be made for solving problems.