As we know, network switch is a telecommunication device in a computer network which connects multiple devices together, such as PCs, servers, laptops, and other Ethernet IP enabled devices. It receives a message from one device connected to it and then transmits the message to another device for which the message was meant. However, users of a certain network switch may get limited in the original operation system set by the vendor. To solve this issue, the term ONIE has raised much attention. Then, what is ONIE and what it means to a network switch? Read through this post to find the connection between a network switch and ONIE.

ONIE, whose full name is Open Network Install Environment, is an open source initiative widely used in bare metal switching and computing community. It is the combination of a boot loader and a small operating system for network switches that provides an environment for automated provisioning. Since it is an open compute project (OCP), ONIE can share designs of data center products among companies, including Facebook, IBM, Intel, Nokia, Google, Microsoft, Dell, Cisco, etc. Nowadays, it has developed into a network OS installer used by many white box switching vendors to load a network operating system onto their switch. 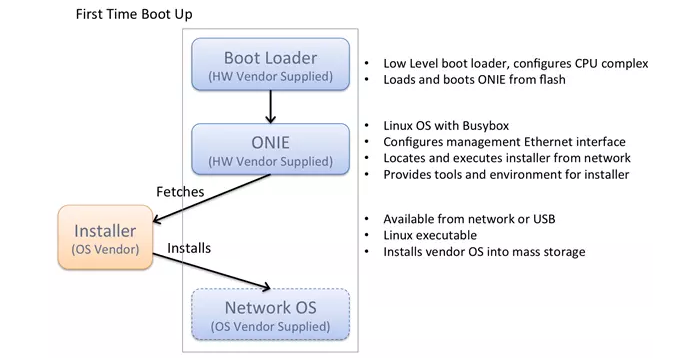 More exactly, ONIE is a small operating system based on Linux that boots on a network switch. It discovers network installer images available on the local network, transfers an appropriate image to the switch, and provides an environment so that the installer can load the network OS onto the switch.

What ONIE Means to a Network Switch?

Consumers of white box switches (a Gigabit Ethernet switch, for example) are attracted to the platform in part because they can run any compatible network OS they choose without having to change the switch itself. ONIE makes the task of loading a network OS for choice, and subsequently changing to a different network OS later with ease.

As an open compute project designed with open flow protocol, ONIE utilizes the CPU complex of the switch looking for an available network OS installer from a local USB drive or out on the network via HTTP, FTP or TFTP. Once discovered, the network OS installer is transferred to the switch, and then ONIE executes it. With the ONIE used in a network switch (for example, a 48-port switch from FS), you can choose the operating system compatible with ONIE to realize the separation of software and hardware. Then, you can set and change the software function as you wish. With ONIE, you are not limited to the system provided by the brand manufacturer any more.

From all the above, it is obvious that ONIE plays an important role in network switch. It can provide you with an environment for installing any network OS. And an ONIE-enabled switch can autonomously select an operating system compatible with ONIE. By the way, FS.COM can provided you with such network switches for different needs and can ensure you great advantages on the cost, flexibility and applications.

This blog is listed under Data Centre Management , Networks & IT Infrastructure , Hardware and Server & Storage Management Community
Share this Post:
0
Was the blog helpful?
Related Posts: