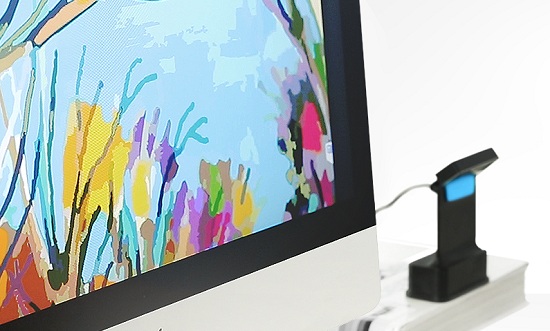 Smartphones and tablets have touchscreens, but it can be trickier for people to get their fingers involved with PCs and notebooks. Ractiv, Kickstarter success has introduced Touch+, which it believes is the ideal motion sensing bar. A top-down approach is used by Touch+ and it creates a virtual multi touch layer just on top of the keyboard. Using the name Haptix, the sensor bar was able to raise a sum of $180,000 in September of 2013. Basically, it comprises of a small block of aluminum that comes with an IR LED array and has two front cameras as well. People can clip it to the LCD monitor where the webcam is usually found or the top of the laptop lid.

According to the information on www.ractiv.com, Touch+ isnât the only motion tracking device that is available as Kinect of Microsoft performs a similar function and the Motion Sensor of Leap also tracked the movement of gestures and hands. However, the amount of movement that needs to be made is the factor that distinguishes this particular motion tracker from the others. Expansive moving and waving around can be exhausting. This is one of the reasons why the concept of touchscreen laptops was slammed by Steve Jobs as it was ergonomically incorrect because people end up getting tired.

This has been considered by Ractiv and they have designed Touch+, which enables people to keep their hands exactly where they are normally. As a matter of fact, movements can be minimized even more as compared to when the traditional trackpad is being used by people because they donât have to reach forward and back between the trackpad and keyboard. The sensors are quite simple as they have a 50 cm range for enabling multi touch and 100 degree field of view. The software processing of the system makes it special and unique.

Touch+ knows how to differentiate between the movements when the fingers make movements for navigating and utilizing the virtual touchpad and the movements made by the fingers for typing, which have to be ignored. Thus, people donât have to pause when they go from typing to choosing UI controls to let the sensor figure out what they are doing. Playing games is also made simple and fun with Touch+ as people can have the keyboard shortcuts right at their fingertips while moving their fingers around for mimicking a mouse. Another possibility is that of photo apps that can replicate the flexibility offered by the tablets, but at a fraction of their bulk and cost.

When Touch+ is used over a keyboard, it will be able to recognize about 7 to 8 points of multi touch and it has the ability of keeping track of two independent hands. This means that different controls can be assigned to each hand when people wish to use 3D CAD graphics or even play flight sims. Quality construction and accurate design decisions have also worked in its favor so the end result can be seen in the form of a posable and small bracket with a fabric-covered magnetic clip.
This blog is listed under Development & Implementations and Gadgets Community
Share this Post:
0
Was the blog helpful?
Related Posts:

How Can Augmented Reality Used for Brand Prom...

What are the Top Microsoft Technologies?

Top innovations in In Gaming Technology to ...