Take me to MyPage
I'm not curious
SKIP>>
We built MyTechLogy for you
Help us to help you.
Share your expectations and experience to improve it.
Please enter your feedback.
Thank you for your feedback!
Click here to continue..
Thank you for your Feedback
Your feedback would help us in sending you the most relevant job opportunities
You are here: Home / IT Blogs / IT Blog View
Below are some key indicators of what 2015 might look like when it comes to Social Media Marketing. 2014 had bought some surprising and new trend. It will be interesting to see what social media trends will be seen dominating the rest of 2015.
#1 Visual Content Marketing: 2015 will see the rise of visual content to a whole new level. With the emergence of image based social media platforms like Pinterest, Instagram and Tumblr marketing is shifting from the traditional plain text content to more visually appealing image based content curation. According to TechCrunch, when it comes to picking up new users, Tumblrâs active user base in the last six months grew by 120%, while Facebookâs grew by only 2%. Pinterest and Instagram saw an overall growth of 57% and 36% respectively in terms of new users. The below graph suggest that the image based sites are attracting more users compared to other platforms.
Not using high quality images in your content may make your social business page dull and boring. Use photo editing tools, collaborate with the graphic designer and create image heavy content for social media exclusively.
#2 Paid Ads should be part of the Marketing Mix: Although organic traffic is considered to be much more reliable and long lasting with free high quality traffic it takes efforts and time to see visible results with immediate effect. Sometimes to yield quick result marketers should not ignore the potential of Paid Ads be it Google Adwords or Facebook Ads. There should be a right balance between the two depending on the companyâs budget, overall marketing goals and target audiences.
Marketers have to consider which one will be the right platform for their business to run the Paid Ads depending on their individual goals. In 2015, Marketers has to open the door to seek new opportunities and take up calculative risks.
#3 Content Is Still The King: Content Marketing will remain one of the effective branding tool even in 2015. Some expert suggests content marketing seems to have hit its peak in 2014. It may have slow down but it will go steady. Publishing quality content, showing the value of contentâs efforts, and distributing it better will be the keys to success in 2015.
#4 Do not Ignore Slideshare, Instagram and Pinterest: Old school social platforms like Facebook and Twitter will still enjoy their dominance in 2015 but itâs time to give some love to sites like Instagram, Pinterest and Slideshare as well. With the rise of image based content sites its time to embrace new and emerging social media channels. For B2B Marketers Slideshare could emerge as the key social media network for lead generations.
#5 Mobile Friendly Web:
Come 2015 people are going to spend more and more time on their mobile phones than ever before. According to Statista, the number of mobile users worldwide will reach 4.88 billion in 2015. Mobile internet access enabled by smartphones and tablets has nearly doubled the amount of time spent online since 2010 (Heidi Cohen). It has become more important than ever to have a web presence that focus on the mobile users. Some research suggests that nearly half of consumers say they wonât return to a website if it doesnât load properly on their mobile devices. Companies have to adopt mobile-enabled web presence and pay attention to social and mobile marketing. 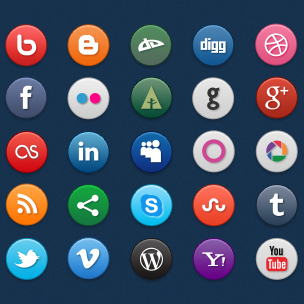 A Future of Social Media