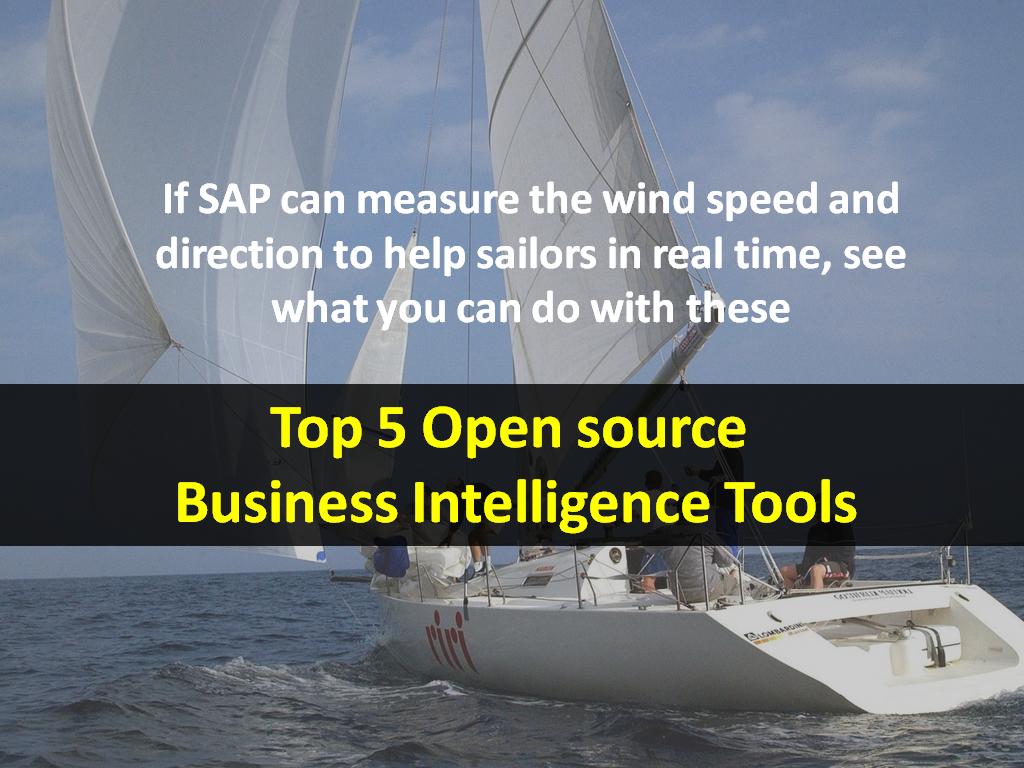 Business Intelligence tools are developed to recall, examine, covert and report data for work uses. Basically, these tools assist users to register and plan data that have been stored in any database form.

Here are my top 5 list of business intelligence tools that are worth considering.

BIRT is part of the open source Eclipse project and was first released in 2004. It provides a platform to produce data visualizations and reports that are inserted into a clientâs web applications, particularly those data that runs on Java and Java EE.
BIRT is licensed under the Eclipse Public License and is derived from the Eclipse foundation.
BIRT is made up of different portions. The main ones are the Report
Designer and BIRT Runtime and the supplementary ones are Chart Engines, Chart Designers, and Viewer. With the functions that BIRT provided, clients are able to develop and publish reports as a single definitive solution. Furthermore, with its Design Engine API, you can add reporting features to your own applications.
The BIRT Report Designer has a comprehensive and robust feature set with its intuitive yet easy to use user interface. A differentiating factor of the BIRT is that it presents reports primarily to web. Also, by using the Viewer on a Java application server, business executives can use the web interface to provide and examine reports.
The vibrant BIRT community or the Developer Center at Actuate provides much needed software support as well. The project also provides extensive documentation and a Wiki.
JasperReport

JasperReport is arguably one of the most well known and universally used business intelligence tool.

Recently acquired by TIBCO, the JasperReport is mainly catered for production business.

The intelligence tool is consists of various components, including JasperReport Library, IReport Designer and JasperReport Server.

A distinctive feature of the JasperReport is that it provides a pixel-perfect likeness in viewing and printing its reports. The JasperReport is set up with OLAP,ETL and Server components that allows it to be a key asset and a useful tool in the IT framework for many business enterprises.

The JasperReport comes in various editions:

Community Edition is made up of a server repository, a mobile BI and is further supported with community forums and a wiki. The Professional and Enterprise editions have additional attractive features including interactive visualization and drag-and-drop report designing.
Pentaho

Pentaho is widely different when compared to the previous 2 tools.

It is said to be the complete business Intelligence and analytical suite where it encompasses a wide range of functions and uses from data integration to reporting. The Pentaho also has a list of open source projects.

Most importantly, the Pentaho has its fundamental BI features including its versatile Visual Report Editor and PDF and HTML report software, security and role management and the capability to email reports to users.

The Pentaho also has a built in Pentaho BI Server. This is a Java 2 platform, standard edition (J2EE) application which provides a platform to process and examine reports through a web-based user interface.

Not to forget, the Pentaho has its own community and forum for software support and additional plugins, a Jira bug tracker, and a well grounded Wiki that provides documentation.

Other additional benefits of the Pentaho are its visual analysis, predictive modeling, dashboards and a mobile element.

RapidMiner provides a wide array of data formats including Hadoop, CSV, Excel, Oracle and MySQL. The BI tool can be enhanced with additional plugins created by open source developers in a dynamic community, and has plenty of extensions available in the marketplace.

RapidMiner comes in Starter Edition where itâs free to use and provides access to Excel and CSV data. Personal, Professional and Enterprise Editions are also available for use.

SpagoBI is the complete open source business intelligence suite. Its modular architecture, based on open standards, allows for easy customization and integration into legacy environments.

Based from the SpagoWorld initiative and founded by Engineering Group, SpagoBI offers a great array of analytical functions, a highly practical semantic layer (which lacks in other open source platforms) and a worthy set of advanced data visualization features including geospatial analytics.

SpagoBI is under the Mozilla Public License, is managed by OW2 Consortium, an independent open-source software community.

SpagoBI has a behavioral model that controls the visibility of over documents and data. It also allows the much needed number of analytical documents to monitor growth of projects. The SpagoBi administration tools also consist of scheduler, import/export, user profile system and graphical interfaces.

Also worth mentioning, SpagoBI has other Cross-Platform services that include cross navigation, metadata visualizations and collaborative tools.
Conclusion

Thatâs my top 5 recommended BI tools that you might want to consider using for work.

If you have other BI tools to share or questions to ask, do leave a comment below!

For more useful info and tips on tech matters, you may visit my page at MyTechLogy.com

This blog is listed under Development & Implementations and Data & Information Management Community
Share this Post:
3
Was the blog helpful?
Related Posts:

Must to Know Data Management Hacks to Derive ...

The importance of preventing deadlocks in an ...