Windows offers the choice between two file system families: FAT andNTFS. When formatting new media, you can have a question as to which one is the better file system. As usual, there is no single definite answer. Both file systems can serve you better under a variety of circumstances. 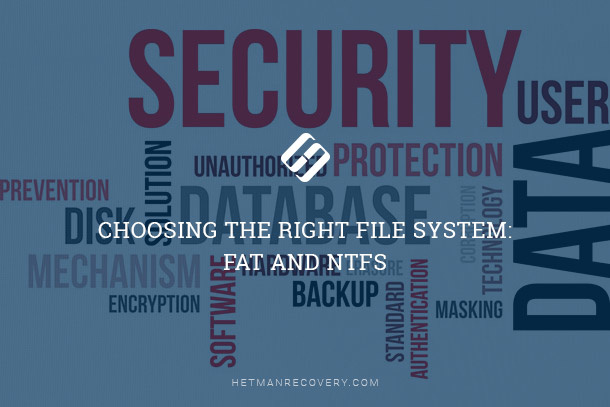 Of the two file systems, NTFS is the most advanced by a large margin. Vastly increased durability and reliability, transaction-based access, alternative data streams, support for on-the-fly file compression and data encryption, access control rights management and many other features that are not available in any incarnation of the FAT file system make NTFS technically superior. However, this superiority comes at a price.

The Price of Technical Superiority

With NTFS being so much âbetterâ than FAT, why is anyone using the simpler, older file system? The answer lies in the price you pay for this technical superiority.

In order to deliver the increased durability and reliability provided by transaction-based, fully logged access, NTFS maintains a transaction journal that stores (even if for a very short while) information about each write access operation. In some configuration, every read operation also causes a write to store information about last access time. This means two things. First, the file system needs space on the disk to store the transaction journal. This also means a vastly increased number of write operations per transaction, which in turn slows down performance of write-stranded media such as USB flash drives and memory cards. In addition, increased write load leads to much shorter lifespan of flash-based media such as SSD drives, flash and memory cards.

So, in a word, NTFS is a better file system, technically; but the superiority comes at a price of bloated system areas and heavier write load. Simply said, youâll get less free space when you format a disk with NTFS, and youâll get shorter life from a solid-state storage device.

While both file systems are developed by Microsoft, NTFS is viewed as a more âclosedâ file system compared to FAT. Windows PCs are pretty much the only thing that fully supports NTFS-formatted disks. Digital photo cameras, MP3 players, smartphones, most non-Microsoft tablets do not and will not support NTFS if for no other reason but legal restrictions and licensing costs, let alone the increased footprint and the much more difficult technical implementation in portable devices with low computation power.

Initially, such manufacturers as Corsair, Hitachi, Kingmax, Seagate, Sony used FAT as a universal file system for all drive types. Today, it can be viewed as an extremely simplified version of a file system. Does that mean that FAT is a âbetterâ file system? Again, this is not the case. While, indeed, FAT has a much smaller footprint compared to NTFS, the older file system does not offer any of the perks provided by NTFS. No durability under heavy load, no file access restrictions, no this and no that may not mean much when talking about a memory card or USB flash drive, but can be a whole world of a difference if youâre about to format a system drive or a disk to hold important data.

Simply put, there are used for both. You will use NTFS under certain circumstances, while youâll use FAT in other cases.

What Is Data Recovery and How Does It Work

How To Recover Deleted Files in Windows 10 fo...

How To Troubleshoot Virus Infected Files And ...

Mobile Cloud Computing and Why You Should Ado...

Searching for Free Way to Convert OST to PST?...