Take me to MyPage
I'm not curious
SKIP>>
We built MyTechLogy for you
Help us to help you.
Share your expectations and experience to improve it.
Please enter your feedback.
Thank you for your feedback!
Click here to continue..
Thank you for your Feedback
Your feedback would help us in sending you the most relevant job opportunities
You are here: Home / IT Blogs / IT Blog View
Question: I always do a lot of video conversion to remove the incompatibility on my various devices. The problem is that it takes a relatively gargantuan amount of time to finish the conversion. Can you tell me what matters to the conversion speed and how to speed it up?

The video conversion speed greatly depends on two aspects: one is the source video and its output settings, the other is your computer's performance.

Source video and its output settings:

1. Codec of source video: There will be a significant difference in speeds based on the codec used to encode the original video file.

3. Video output codec: If you choose a complex codec for output video, it will take more time to convert than a simple codec.

4. Video/Audio output parameters: The parameters include target resolution, framerate, bitrate and others can affect the conversion speed.

1. The number of computer core: The core, also known as the kernel, is the most important part of the CPU. The more the core numbers are, the faster the conversion speed will be.

4. Number of running process: The number of simultaneous tasks you are performing will directly make a big difference in conversion speed.

5. Task priority: You can open "Task Manager" then go to "Details" to set the high priority.

Part 2. Some Examples for Conversion Speed

In order to understand easily, we will give some examples of conversion speed below.

3. Likewise, video A needs to re-encode its audio while video B doesn't change. It results in the poor conversion speed of video A.

4. Video A changed its audio codec, and video B changed its video codec. You should know that the Video encoding is more time-consuming than audio encoding without the hardware acceleration. So here A done faster than B.

5. If you choose the high bitrate, the conversion time will longer than low bitrate.

Note: Some settings will make videos quality become lower. Please choose the proper settings according to your demand.

In general, the higher quality you required, the slower speed you will get. If you want to get the high quality video also with the fast conversion speed, you can change your computer's performance as we mentioned above.

This program takes full advantage of the NVIDIA CUDA (include the new NVIDIA NEVNC), AMD APP Intel QuickSync technology to dramatically accelerate conversion speed，while most of other software program can't support AMD APP and Intel QuickSync. And your computer will run much smoother and faster than ever before when you convert videos with Video Converter Ultimate.
Download the trial version from below link and take a try.

No professional knowledge is required. All you need to do is to add or drag your file to Video Converter Ultimate, and then select an output formats. This software will do the conversion for you automatically with fast speed and high output quality. In addition, click "Main Menu" and select "Preference" > go to "Convert" tab, then you can set the CPU core and choose enable the GPU acceleration here. 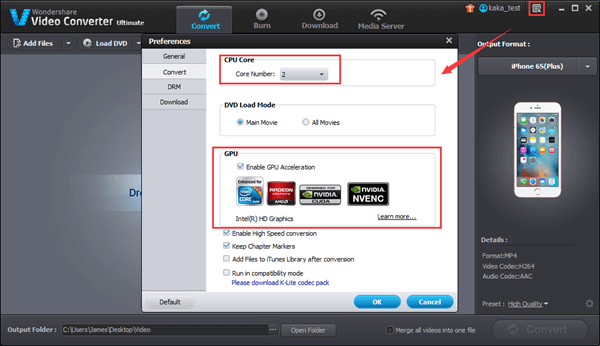 Now you know why it takes so long to convert your videos. You can try to change the video parameters to reduce the conversion time, for we can't change the computer hardware specs. When you meet the incompatible format next time, try to use the fastest Video Converter Ultimate to convert them.

Any question, please feel free to tell us by writing them in the comments.
This blog is listed under Digital Media & Games Community
Share this Post:
1
Was the blog helpful?
Related Posts:

Android browsers you should try

Useful Tips to Play Movies from iTunes via Pl...

How to convert M4V to MP4 on Mac with ease?