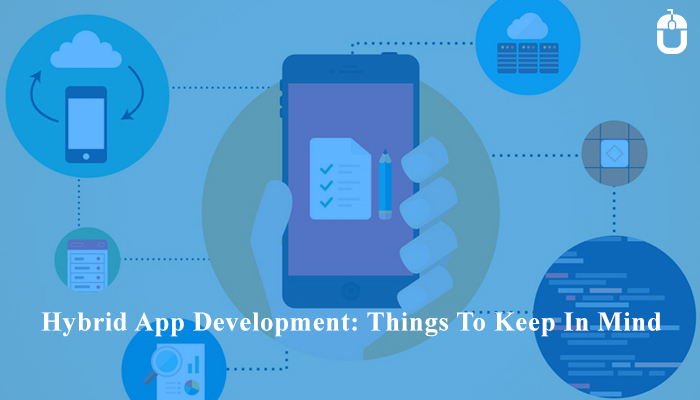 The onset of mobile applications has overcrowded the marketplace. Therefore, it is necessary that one must have a distinct idea for an app and the kind of app they want to float around for people to feast their senses upon. Now, an individual would usually go for a native app, web app or a hybrid app. Each of them has some exclusive features and it entirely depends on the business proposition, the kind of app the individual/organization wants to develop for its consumers. Today, we’re specifically talking about Hybrid Apps. So, let’s discuss what to expect and the things to keep in mind while opting for a hybrid app for your product/service with Techugo.

What is a Hybrid App? : A hybrid app is an app that has the features of both the native app and web app. It’s an amalgamation of HTML5 and native app. It is usually developed using the HTML5/JavaScript/CSS scripting language and act as a link between native and web apps.

Features of a HybridApp: A hybrid app is fast paced since it doesn’t have to be loaded on a mobile and at the same time has the characteristics of native apps, viz., access to the features of the device. It costs relatively less to create a hybrid app than a native app.

Why choose Hybrid App? : Hybrid App gives its users the freedom to enjoy the features of the app like no other app platform. It has the prime properties of native apps and web apps. It is the best of both the worlds and also, it is economical.

Making The Right Choice: People always get confused while trying to select the best app for them. It is indeed a crucial process and should be dealt with extreme care. Let’s list a few arguments below to clear the thought process and help you decide for yourself.

1. The frequency of update -If you’re developing an app that needs constant updates, it is best advised that you should go for a hybrid app. The reason for this is that a hybrid app can be updated on the web by the developers and the user won’t have to worry a thing about updating the app as opposed to in the case of a native app, where a user will be reminded of the update by the app store constantly which might end up annoying him and leading to the uninstall of the app if the updates are too frequent.

2. UI/UX –This is one of the most important aspects of the app. This alone decides your app’s popularity. This is what a user bases his opinion upon. If he likes the UI, the UX is bound to be exceptional. Hands down, native apps are the best when it comes to the UI/UX aspect of the app, but hybrid apps aren’t far behind. Hybrid apps also provide a certain level of UI/UX but not to the extent of native apps. Hybrid apps are a solution when you’re targeting a large user base and want to tap a bigger market since hybrid apps don’t require a specific environment to run on.

3. Time of attack - The type of app you want to go for also depends upon the time you have allotted to launch your app in the market and the size of the audience you’re willing to capture. If you’re running short of time on your hand and want to connect to a large audience, a hybrid app would work just fine in your favor for the following reasons:

(a) It takes considerably less time to build a hybrid app ‘cause it is built as an app that runs on the web browser and isn’t dedicated to one particular environment.

(b) Since there’s no restriction of environments, it can be accessed by many without the need to download it from a portal.

4. Limitations of a Hybrid app -A hybrid app is only a few steps behind in terms of the app performance. While native apps have a free-flowing, flawless performance, hybrid apps lack a bit in the smoothness since they’re not based on a particular environment. Also, hybrid apps are bound to use a bit more memory than the native apps generally use since they’re not optimized according to a device’s environment.

Conclusion: There are two sides to a coin and it entirely depends on your business requirements and whether you count the merits or the demerits of the technology you want to go ahead with, because, in the end, the only thing that matters is consumers. If you have got your game rolling, no one can beat you to it. So choose wisely.

About Us: We’re a mobile app development company in India and we have the expertise in developing native apps for iOS and Android, hybrid apps and web apps for mobile devices. Our experts possess the required knowledge to deliver the best in the class app for your services.
This blog is listed under Development & Implementations and Mobility Community
Share this Post:
1
Was the blog helpful?
Related Posts: