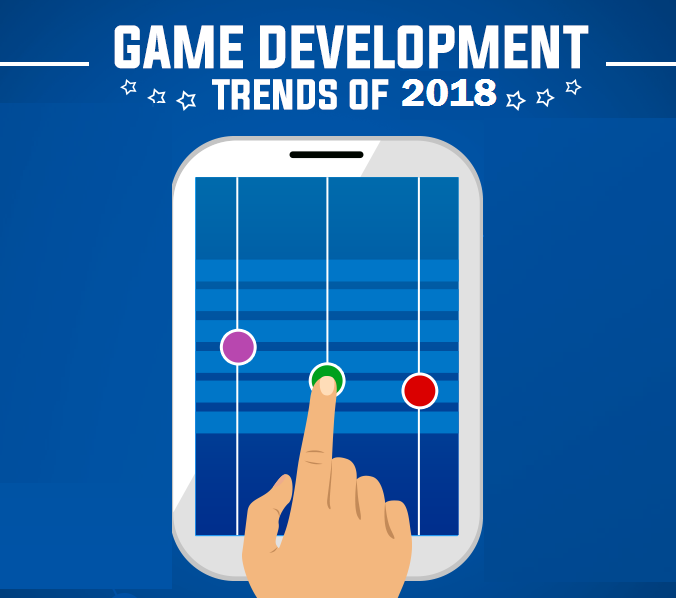 In today scenario, the mobile game marketing is growing very fast and more peoples are getting attract into the mobile gaming world. The game development company trying to develop new creative and unique games. We know that the millions of game downloads or being played online every day. 2017 was a big year for mobile game development companies and it’s going to follow in 2018 as well. Naturally, mobile games also have been the most happening niche in respect of new technologies and innovations. Each year we see new innovations and trends in the mobile gaming industry and by the coming years, there will be a lot of differences in comparison to latest functionality. Most of the people like to play the game on mobile phones as compared to desktop. So, the companies are focusing on developing games for smart phones rather than desktop.

7 major mobile game development trends to keep in touch with.

Virtual reality (VR)and Augmented reality (AR) have huge scope in gaming industry now a day. Bridging worlds appears to be a sweet spot for VR/AR technologies. VR is an artificial, computer-generated simulation or recreation of a real-life environment or situation. In addition to our real physical environment, in Augmented Reality, we will be given additional information or data overlay, digitally, in real-time. AR/VR games provide an immersive experience that customers engage with. There are investors, developers, and industry insiders calling VR/AR the biggest technological leap since the smart phone. Both the technologies have been consolidated and became mainstream as the gaming technologies of the future.

2. Mobile games for the elderly

Gaming Among Seniors is on the Rise Around the World. 27% of active gamer in the United States are age fifty or older. Computers in Human Behaviour has found that sixty percent of their older adult sample were either regular or occasional gamer on some sort of electronic device. Senior citizens are showing increasing interest in new technologies and evolving interfaces, and mobile games. 2017 may be the year when game developers focused on mobile games for senior citizens. So the next time you see an older loved one squinting at her phone, don’t be ageist.

Social gaming tend is going fast since last years. As more people are highly engaged with social media most of the time that's why the social game is very popular now a day. The game players easily able to interact with their social friends and can invite them to play. We can understand that the things the rise of social gaming in 2018 and the coming years. The online gaming trend is also increasing in today scenario and most of the people like to play games on social platforms which allow them to share, invite their social friends to get connect through online gaming.

There are various games that can be easily played on mobile as well as laptops, thus supporting different platforms. Angry bird is one such game (cross-platform games). Cross-Platform Games are compatible with both mobile devices and desktop as they can easily play any platform. Write Once Run Anywhere (WORA) refers to a piece of code that is written on one platform but can easily run on multiple platforms like android, ios, and windows. PhoneGap, React Native, Xamarin, Unity 3D, Appcelerator, Sencha Touch are some popular tool to develop cross-platform games.

Custom features allow making a player feel important, and it is something everyone likes almost invariably. The player like to play Custom features because the player can manage according to this requirement. The custom game features allowing players shaping their own gaming experience have been very popular with mobile games this year.

The development of Multiplayer mobile games is getting its value with its increased number of users. More than one use plays a game together at the time. Some other games are developed depending on the roles played from the movie. Many business people find their way to popularize their products through entertainment media to advertise and market their products.

All these trends help you to determine how it might your gaming impact now and in the future. It will surely be fun seeing what comes down the pike for both the gaming companies and the consumers who are always looking forward to something fresh and new.

This blog is listed under Digital Media & Games Community
Share this Post:
0
Was the blog helpful?
Related Posts: