Take me to MyPage
I'm not curious
SKIP>>
We built MyTechLogy for you
Help us to help you.
Share your expectations and experience to improve it.
Please enter your feedback.
Thank you for your feedback!
Click here to continue..
Thank you for your Feedback
Your feedback would help us in sending you the most relevant job opportunities
You are here: Home / IT Blogs / IT Blog View
A Snapchat is a young company developed by Evan Piegal, Bobby Murphy and Reggie Brown. The company launched the Our Story feature in the year 2014. The feature was launched in order to give people an experience of attending a live event. After its launch, the app was known to everyone. Every other person in the world uses Snapchat. Facebook launched Poke in opposite to Snapchat, but it was a large failure.

The Snapchat has around 5 million active users per day who shares 300 million photos per day. It is all about sharing your smallest events with your friends and family. The sharing has probably evolved from one-to-one sharing only. Snapchat is basically a collection of snaps submitted by users about different events like holidays, music, etc. All the photos disappear after 24 hours.

The company has done everything possible in order to make a successful app, whether it is the monetization of the app or anything. The main asset of Snapchat is the personal communication. Group messaging is one of the next steps of Snapchat. 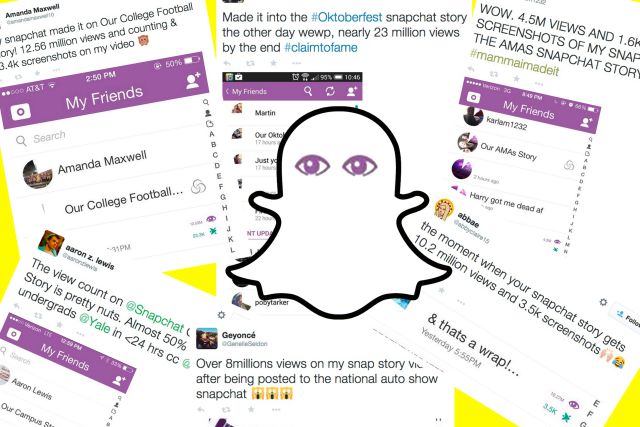 Who is using Snapchat?

Snapchat is mostly directed towards the young people. It is getting new demographic views every day, so it is becoming popular among every group of people. The Snapchatâs story feature is one of the ways of communicating with the fans and viewers by the celebrities.

Snapchat is being considered as a perfect app for everyone. What is the reason behind this popularity?

Letâs have a look at some of the cool features of Snapchat.

Snapchat got 27 million views from around 36.6 million people in the United States for the Oscarâs. This is one of the most popular live events. This was the total number of actual users who actually viewed it.

Our Story of Snapchat shows an aggregated group of individual users. Our Story lets the people enable their location services and shared their stories with great number of audience.

Why do people love Snapchat so much?

If you are looking for some fastest way to share your pictures, then Snapchat would be a great choice for you. A camera is directly opened whenever the user opens the app for the first time. The user doesnât need to go into the menus to search for a camera and open it. Snapchat is quite frictionless.

Whenever a user shares a photo or a video the recipient of that photo receives a push notification. Action-to-reply is being used in Snapchat.

Snapchat is free from any mental barrier. Nothing is permanent on Snapchat; it disappears after a certain period of time.

Snapchat took the first step into broadcast in the month of January and launched the Snapchat discover. It is a platform where users can view 24-hour content from major brands like Cosmopolitan. Snapchat also launched its first series called, Literally Canât Even. Every weekend, new episodes are being added. These episodes last for 24-hour time period.

Snapchat is not about how many viewers you have, it about how much interaction you are doing with the viewers. Snapchat does not show actual followers and it is believed that it must be having at least a million of followers.

The main job of Snapchat is to make the stories available to all the millions of users worldwide. The contributors of the story can view their viewers and the number of screenshots by viewing the My Story section. It is one of the new medium of communication and it is running on the platform that evolved years after the television has become popular. By enabling the location services, the users can see the ongoing events and all the active users around.

The Our Story section was believed to be viewed by around 1 million users per day. Some of the users also posted earlier that day when millions of people viewed Our Story section. These people accumulated the views even after the 24-hour cycle.

Our Story could be a big leap for Snapchat. The sharing feature is public sharing rather than the private sharing. Snapchat has not announced any new Our Story events yet. The contribution to Our Story makes the company Snap-famous. Snapchat is a great messaging system as it lowers the inhibitions of text messaging. It is very light weight and the nature of interaction is really great among people after using Snapchat.

Photos and music have always been a personâs prized possession and when everything is going to digitize, the experiences are getting more valuable. It is not possible to attend every like event, but Snapchat made it possible and found a way with Our Story feature.

The big players are not the competitors of Snapchat; the competitors are the new apps coming with new features. Snapchat is becoming very popular among people and it is considered to be the most advanced broadcast medium. Another feature of the Snapchat called, Discover, is a group of popular news stories from known sources.

Mobile is purely a growth engine nowadays and Snapchat has taken full use of Web 3.0. Whenever a snap disappears from Snapchat, it is gone forever and cannot be seen in the future. Snapchat is an epitome of various different trends like free, open, private, mobile, etc. There are very less companies that are getting as much successful as Snapchat.

The Snapchat will come with many more features in the future as well. It is known as the status symbol for youngsters, but in some time it is going to conquer each category of people throughout the world.
This blog is listed under Development & Implementations Community
Share this Post:
2
Was the blog helpful?
Related Posts:

Marketing mishaps to avoid at all costs

How SaaS and Cloud Computing are Transforming...