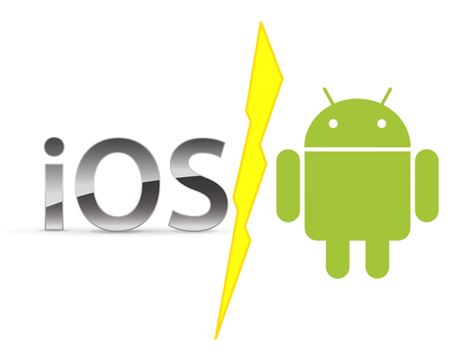 The difference between Android and iOS is vivid and when you use both or have used both the smartphone platform, you may easily judge it. The fact remains that zeroing in a smartphone or a tablet platform is obviously a well-considered decision since switching from iOS to Android brings in the requirement of buying the apps again in Google Play (Apple app) store. Android is quite in use and demand and has now emerged as the worldâs most commonly used smartphone platform. Android is also being used by the worldâs renowned phone manufacturing companies whereas iOS is being used merely on Apple devices like iPhone.

The interface for both Android and iOS is same sine both use the touch interface and they have much in common such as tapping, swiping and pinch and zoom. Besides both the operating systems boot to the home screen that is aptly and largely similar to computer desktop. On iOS, the home screen simply shows app icons rows whereas Android lets you use the widgets which show off auto-updating details like e-mail and weather updates. In addition to all this, on both Android and iOS, a status bar runs which offers the information like WiFi, cellular signals, battery life and the things. And on Android, the status bar reveals the e-mail notifications, etc.

Apps Available for Android and iOS

We all are aware that Android gets the apps from Google Play and interestingly Google Play carries more than 600,000 apps available for the users. Therefore few of the Android devices like Kindle Fire use separate app store which carry a tiny selection of the available apps. Besides there are many others apps available on Android such as BitTorrent, Adobe Flash Player, Pintrest, Instagram. Android also gives the users the access to Google Docs and YouTube. On part of Apple, it offers more than 700,000 apps - of which around 250,000 apps are available for iPad only. It is seen that majority of the developers like developing games for iOS prior to developing them for Android users.

Apart from the fact that Google updates the Android often, nonetheless there are many a users who say that they do not receive the updates on their phones. Even there are complaints about phone purchasing with the outdated software. In iOS case, the upgrades are normally available to all of the devices.

Wider variety of the Android devices is available at sizes, prices and hardware capabilities whereas you can find iOS on Apple devices only like iPhone, iPad and iPod.

Android users can use the video chat on Gtalk whereas the iOS users use Facetime for video chat and that too with Apple users.

Maps apps like Google Maps, Bing and Waze are at reach for both iOS and Android users.

Well, Facebook is available for both iOS and Android users. Both the users can upload the pictures and change their status on Facebook and do other things on their timelines using many apps available.

Apart from these features, there are a number of other astonishing features which show the difference between Android and iOS smartphone platforms. For more details please click here. Maria Jhons is a passionate blooger. She loves watching movies. When she is not waching movies, she spends her time with her children and learning and writing about entertainment and technology. You can reach her on her twitter here.
This blog is listed under Open Source , Operating Systems , Gadgets and Mobility Community
Share this Post:
0
Was the blog helpful?
Related Posts: