Take me to MyPage
I'm not curious
SKIP>>
We built MyTechLogy for you
Help us to help you.
Share your expectations and experience to improve it.
Please enter your feedback.
Thank you for your feedback!
Click here to continue..
Thank you for your Feedback
Your feedback would help us in sending you the most relevant job opportunities
You are here: Home / IT Blogs / IT Blog View
Does Apple Music Use Data? The answer is yes. Streaming is awesome: You can listen to anything you want—Beats 1 included—at any time, and it doesn't take up valuable space on your device. But it comes at a cellular cost, especially if you have a smaller data plan. With access to millions of songs, Beats 1's live streaming radio, and your own tracks uploaded to iCloud Music Library, it's pretty easily to run up a big cellular data bill on your iPhone or iPad while enjoying Apple Music. Apple Music will use data if the tracks you are playing are not downloaded to your phone, and you are not on Wifi.
Here is Apple Music and Beats1 Data usage test results from Reddit user EP9, who was curious how much data Apple Music and Beats1 ACTUALLY used. He turned off the WiFi, opened a Data Manager app, Reset iPhone's built in data counter, and hit play on a Bob Dylan Playlist:
According to EP9(the Reddit user), 30 minutes of using Apple Music without a Wi-Fi connection used around 20MB of data, and an hour of streaming ate up around 40MB. Other tests have shown that Apple Music consumed 1.65MB per minute (49.5MB per half hour) while streaming on a 4G connection. These are not official numbers. A lot of people have WiFi at home and work. Even all of our Coffee Shop Authors can get WiFi from Starbucks while working on our Novels. But the result would still give you an estimate in case you're worried about how much data does Apple Music use when streaming over a cellular connection without unlimited data plans.
And accourding to Apple’s Eddy Cue, bitrate of Apple Music tracks depends on whether you’re on Wi-Fi or cellular, suggesting that music streamed over cellular will have a lower bitrate.
Use Apple Music Without Eating Up All Your Data
If the Apple Music tracks are downloaded to the iPhone, or you are connected to Wifi then it won't use data.
One of the best features of any music streaming service is the ability to save songs, albums and playlists for offline listening, so does Apple Music. Which lets you download tracks and playlists and listen to them in offline mode, rather than streaming them over 4G.
With the launch of Apple Music, plenty of three-month free trial subscribers are anxious to test everything out. What's more, Apple Music now has 27 million paying subscribers, up from 20 million subscribers in December and 13 million a little more than one year ago. Let us explain exactly how to save apple music to listen offline so that they won't use data.
Download Apple Music for Offline Listening
If you have an Apple Music subscription and iCloud Music Library enabled, you have the option to download any song, album, or playlist from its catalog for offline listening. It is wise to download those songs before you gear up to your next long trip.

Step 1 Launch the Music app from your Home screen.

Step 2 Go to the song or album you want to download.

Step 3 Tap the More button (looks like •••) to the right of the music. 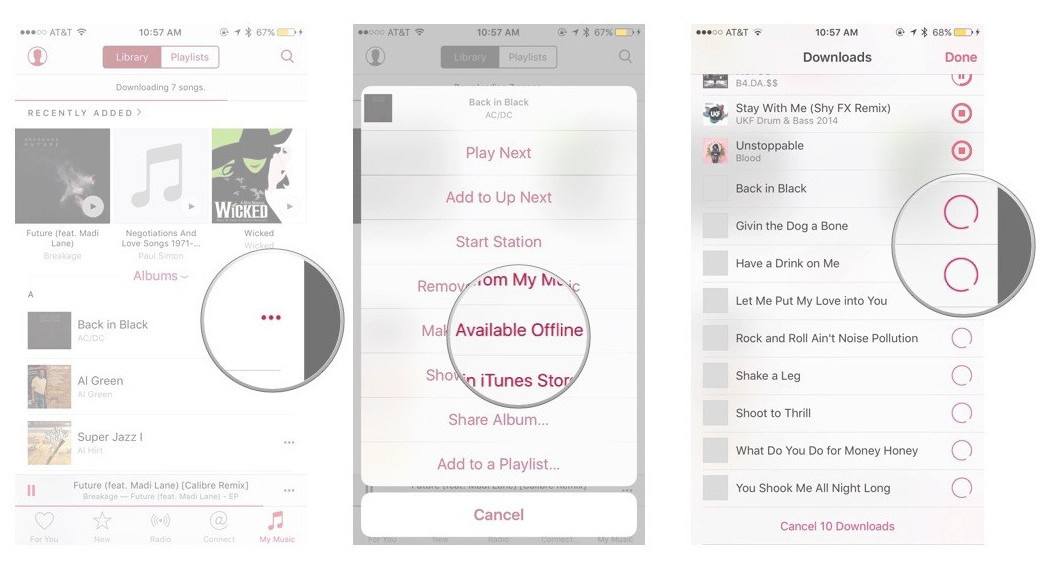 If you're planning on downloading songs to listen to offline in order to save your iPhone data, please make sure you do so while on Wi-Fi rather than over cellular data.
Rrecommended Apple Music Converter
Any song from the Apple Music catalog has DRM (digital rights management) applied to it, which is how the company makes sure you don't sign up for a streaming service, download a bunch of songs for offline listening, then cancel and run away with that music. So you can play any song from the Apple Music catalog on your devices, but after the Apple Music trial ends, any songs from the subscription catalog, however, will become unplayable.
To keep your downloaded Apple Music songs forever on your iPhone, iPad, Mac or other devices, you should remove DRM from Apple Music songs. Simply have a try the Apple Music Converter. It's great and can solve all your problems. Apple Music Converter can remove DRM from Apple Music songs and convert Apple Music DRM-ed M4P songs to DRM-free MP3 with up to 16X conversion speed and as well as CD output quality, and then you can transfer and enjoy apple music on any MP3 audio player devices as you like. And Apple Music will not use your iPhone's Mobile data anymoe.
This blog is listed under Digital Media & Games and E-Commerce Community
Share this Post:
0
Was the blog helpful?
Related Posts:

How Do You Create iPhone Ringtones from Apple...

Free Your Apple Music Tracks to Put them on A...

A Tip to Improve Apple Music Enjoyment on Med...